According to WSJ, Yahoo officially hired CEO Scott Thompson, the 54-year-old president of Ebay’s PayPal electronic-payments unit, signaling Wednesday that it is determined to attract technology executives and computer programmers to revive the onetime Web powerhouse, whose star has faded amid increased competition for ad dollars from rivals, such as Google and Facebook.

In appointing Thompson, Yahoo is choosing a leader with a deeper technology and product background than prior CEO Carol Bartz who was terminated last September. In the interim Yahoo CFO Tim Morse has been serving as CEO.

When Thompson assumes command on Jan. 9, he will join a board of directors that is grappling with other strategic questions, including whether to shed some of Yahoo’s valuable stakes in Asian Internet companies and to potentially sell a minority stake of itself to private-equity investors.
The move also indicates that Yahoo’s board is unlikely to sell the company. Recently, I have heard that Alibaba was a potential suitor, but it looks like Yahoo‘s board is not looking to sell the company as a whole. However, I wouldn’t be surprised if Yahoo sells some of its business units in separate deals, or joins forces with other struggling players in the online media space (watch for a possible deal with AOL) to compete more effectively with Google and Facebook.
Although Yahoo, one of the Internet icons, still maintains some of the Web’s most popular destinations, including its Yahoo.com home page, Yahoo Mail, and sports, news and entertainment-content sites, I don’t have much faith in its future. Beyond the eyeballs, Yahoo neither has effective technology nor innovative monetization models in place to capitalize on its unique market opportunity. I hope I am wrong because I would really like to see Yahoo succeed in turning around its business. 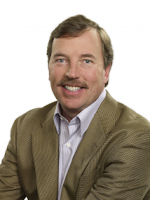 I my opinion, Yahoo badly needs a boost of innovation and energyto regain its lost market position and get back on a growth path. Hiring Carol Bartz as a CEO was a miss, and Thompson – to me – doesn’t appear to be the “savior “ the company so desperately needs. What I think Yahoo needs is a strategic visionary who would reinvent the company’s culture, strategy and product innovation (think of someone like Steve Jobs or Mark Zuckerberg). Thompson rather appears to be an effective operations guy. Although he may succeed in using his Paypal experience to turn around Yahoo’s operations, sell some of its units, and cut a number of great deals, Yahoo will remain virtually the same company  – better-run business with no clear vision to compete with Google and Facebook or become a leader in digital space.
Although Thompson has an impressive track record in payment-processing business, it remains to be seen if he would be able to grasp online advertising model quickly, and provide a successful vision for Yahoo’s growth to its employees, stockholders and investors. The fact that he has no experience in media and advertising is somewhat concerning (prior to EBay, Thomspon worked at Visa), but a focus on reviving Yahoo’s technology, which is the back-bone of its operations, may enable the company to compete better.
Thompson is also going to be inheriting a search deal with Microsoft that has underperformed and failed to
live up to revenue expectations for Yahoo. I don’t expect any changes to Yahoo’s search business though. When the deal with Microsoft was cut, Yahoo completely abandoned its outdated search technology, and now the company needs a vendor to supply its search results and pay-per-click ads. The only other company out there who could strike a deal with Yahoo’s search unit is Google, but of course the regulators would not allow it. That said, the only viable option for Yahoo is to sell its search operation to Microsoft, which has the cash and resources to invest in trying to catch-up with Google in search.
I feel like Yahoo has been struggling over years to establish its identity – tech company vs. media company. In the past couple years, Yahoo execs placed big bets on positioning Yahoo as a media company, shedding a lot of engineering jobs. It seems to me that with the appointment of Thomspon, Yahoo is trying to reinvent itself as a smaller, leaner tech company, which may pay off in a long run, but the stockowners will not see an upward stock trend for a while. I think Thomspon is the right guy to run the operations of any Fortune 500 businesses, but it remains to be seen if he is the strategic visionary Yahoo has been seeking for over the past couple years.
My hope is that under Thompson’s leadership Yahoo will re-emerge as a viable, innovative, and successful Internet company it once was. The great many people who created Yahoo when the Internet was born
deserve it.  Fingers crossed!
January 4, 2012/1 Comment/by Matthew Capala
https://www.searchdecoder.com/wp-content/uploads/2016/08/sd-small-logo-1-300x138.png 0 0 Matthew Capala https://www.searchdecoder.com/wp-content/uploads/2016/08/sd-small-logo-1-300x138.png Matthew Capala2012-01-04 20:58:002016-08-17 20:31:19PayPal's President Scott Thompson Becomes the new Yahoo's CEO - What is the Future of Yahoo?
1 reply