Just in time for upcoming elections, Google introduced an AdWords feature, integrated into its Pay-Per-Click product, that lets marketers target their campaigns by Congressional District.
Given how difficult it is to pinpoint audiences within particular districts by ZIP code or municipality — and the fact that district boundaries change rapidly — the capability should be much appreciated by political campaigners who increasingly turn to PPC to connect with their voters.

In an example provided by GooglePolitics blog, the 6th District of Maryland – which features a highly publicized race between ten-term incumbent Rep. Roscoe Bartlett and Montgomery County businessman John Delaney, is oddly shaped and has voters in many zip codes, towns and communities. With the current targeting features offered by Adwords, targeting this area would require a lot of gymnastics with the standard targeting options. The 6th district looks like this: Now, with the congressional district targeting option, search marketers running political campaigns can quickly and easily target their search, display, mobile and video ads exclusively within that particular district’s border. You can start by heading into AdWords and selecting your District number from the location menu, which is populated with district data in Google Maps format. See below.

True to the old-time political mantra – ‘All Politics is Local’ – Google has made a significant move to attract more campaign ad dollars. To create the feature, Google partnered with Azavea, a company that specializes in the creation of geographic web and mobile software. Azavea provided it with the data to find the Congressional Districts.

By adding congressional district targeting, Google made a compelling case to political campaign media staff to allocate more ad dollars towards performance media, such as Per-Per-Click ads. Those tactics are particularly effective when synchronizing the PPC campaigns with a larger-scale TV ad campaign, which political campaigners tend to favor. However, as they ‘push’ their message through traditional ‘push’ media, they also need to utilize cost-effective methods for engaging the swing voters who perform search as a result of viewing a TV advertisement. At the end of the day, Search is the most effective ‘pull’ medium, and will amplify your TV ad dollars and make the other media work harder.
Political campaigners need to realize that a large number of online search users are driven to perform searchers as a result of exposure to a traditional media channels. According to a Jupiter Research study below, 37% of survey responses indicated that they had performed a web search as a result of being exposed to a TV ad. 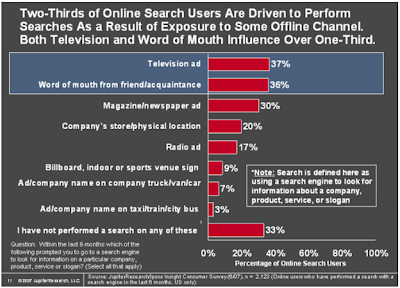 To me, it is a no-brainer to couple a targeted, district-targeted PPC campaign with TV ad scheduling. Why spend millions on TV ads if the voters cannot find you on Google? While you should focus on dominating no.1 ranks in both organic (SEO) and paid (PPC) search engine results, pay-per-click ads offer a unique ability to rotate different messages and point the user to unique landing pages. Now that Google offers razor-sharp targeting options for congressional district, political campaigners should seriously consider shifting more media budgets to search.
By Matthew Capala (@SearchDecoder)
August 6, 2012/2 Comments/by Matthew Capala
https://www.searchdecoder.com/wp-content/uploads/2016/08/sd-small-logo-1-300x138.png 0 0 Matthew Capala https://www.searchdecoder.com/wp-content/uploads/2016/08/sd-small-logo-1-300x138.png Matthew Capala2012-08-06 14:37:002016-08-17 20:45:49In Time for 2012 Elections: Google Introduces Congressional District Targeting in Adwords
2 replies